MUNICIPALITIES IN THE WATERSHED 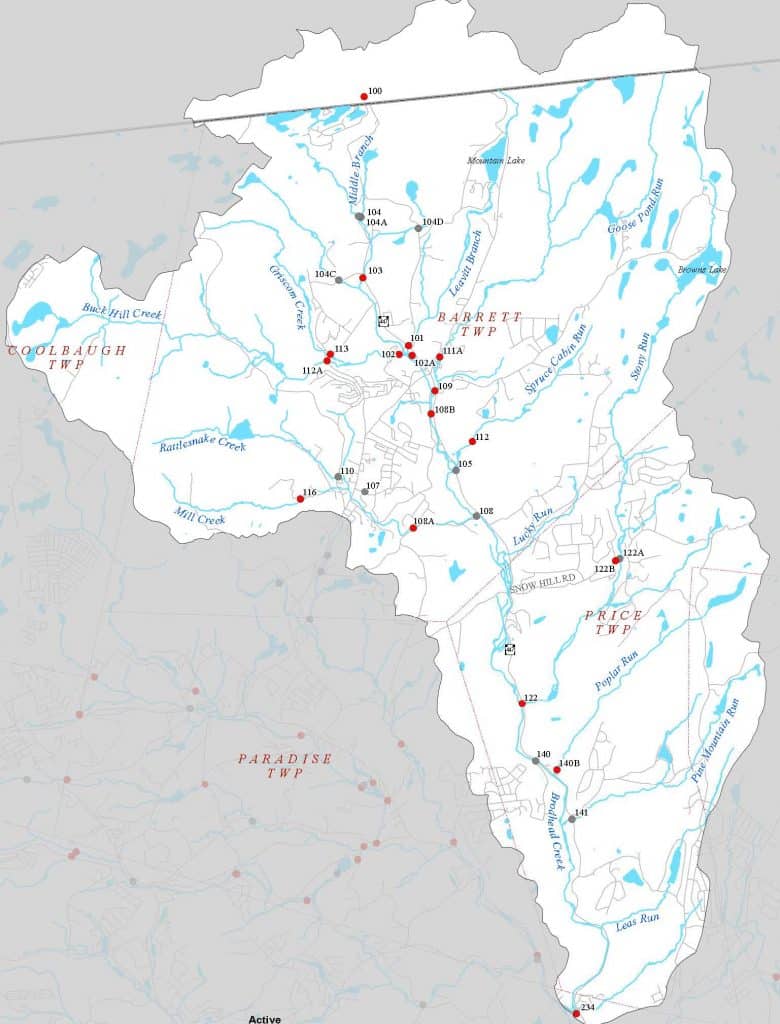 The Upper Brodhead subwatershed includes the headwater tributaries, as well as eight miles of the main stem of the Brodhead Creek above its confluence with Paradise Creek near the intersection of Rt 191 and Rt 447. The Upper Brodhead subwatershed drains an area of 65.9 square miles, including parts of Coolbaugh, Barrett, Price, and Middle Smithfield townships. A small portion of the upper headwaters extends into Greene Township, Pike County. The Upper Brodhead Creek is paralleled by Route 447. Most of the headwater streams of the Brodhead Creek are found in Barrett and Price townships. These include Buck Hill Creek, Middle Branch, Leavitt Branch, Goose Pond Run, Spruce Cabin Run, Stony Run and Poplar Run.

The headwater tributaries of the Brodhead Creek sustain a 900-foot vertical drop, resulting in waterfalls found on Stony Run, Goose Pond Run, Spruce Cabin Run, two on Buck Hill Creek, Spruce Mountain Run, Rattlesnake Creek, and Leavitt Branch (Indian Ladder Falls). Alpine Mountain ski area is located along the Brodhead Creek, upstream of the confluence with Paradise Creek. Skytop Lodge is located on one of the highest elevation of the Brodhead watershed, on the Pocono escarpment.

The headwater streams of the Upper Brodhead were named for their location, appearance or function. Some, like Red Run, emerge from acidic bogs on the edge of the Pocono Plateau and are named for their colored acidic water. Others, like Clear Run, are spring fed and named for their crystal clear appearance. Flowing through the rock outcrops of Cresco Heights, Rattlesnake Creek was named for the reptiles found in these parts.

In the century past, the streams provided power for the tanneries, which brought prosperity to the region. Mill Creek, which flows through Mountainhome, was one of the more heavily used creeks. Later, visitors experienced the joys of fishing the small runs and brooks. Canadensis, the village where the streams converge to form the Brodhead, has often felt the power of all that water. Spring floods regularly affect the surrounding homes; most devastating was the flood of 1955 when bridges and dams up and down the creeks washed out and isolated many areas.

The large tracts of undeveloped land in state gamelands or owned by private individuals, hunting clubs and the older resorts of Skytop and Buck Hill serve as buffer areas protecting these streams.

Two sewage treatment plants discharge to the streams, one serving the community of Buck Hill Falls and one the Skytop Lodge and community. Fortunately, population growth in the headwaters areas has been relatively slow, so streams have not been significantly impacted.