WHAT IS PROJECT HEADWATERS?  In 2021, BWA was awarded a small grant from the PA Growing Greener program to study two small headwater streams in the Paradise watershed that volunteer monitoring indicated had high levels of conductivity.
SCIENTIFIC BACKGROUND:  Conductivity is a measure of the ability of water to pass an electrical current, measured by the unit μS/cm (microsiemens per centimeter).  Under natural conditions, a sandstone/siltstone/conglomerate dominated watershed has low levels of electrical conductivity.
When salts like sodium chloride (NaCl) and other substances become dissolved, and enter surface and groundwater, measured conductivity will increase.  Research has shown that high levels of some dissolved ions, such as chloride (Cl-), in fresh water streams and lakes can affect aquatic life.
Measuring conductivity is a simple way to determine which streams may need further study.

Average conductivity  in Monroe County streams in Spring 2020, was 114 μS/cm.

THE STUDY: Water samples were collected a three locations on each stream, on six dates, in all seasons and all flow levels (low, medium, and high as determined by an electronic logger).  A certified laboratory analyzed the water for aluminum, calcium, chloride, iron, magnesium, potassium, silicon, sodium, alkalinity, bicarbonate, carbonate, nitrates, nitrites, phosphorus and total organic carbon.
Lab reports show very low levels present in the samples for most analytes. Calcium and chloride were consistently elevated above levels typically found in Monroe County streams by the Monroe County Annual Water Quality study. Sodium was also present, but is not tested in the County study.
For more information, including lab reports, and drainage area maps, visit https://www.dropbox.com/home/Project%20Headwaters%20%20%28GG%20Grant%29

○ Chloride, sodium and calcium are the most prevalent ions in both Forest Hills Run and Yankee Run.○ These dissolved ions are present throughout the year and at high, medium and low stream flow○ There is a strong correlation between conductivity and chloride levels.○ Chloride and calcium levels at all test sites are much higher than levels found in other Monroe County streams.

Sodium, calcium and chloride are major components of de-icing products, including “road salt.”None of these dissolved ions can be removed by water treatment systems. 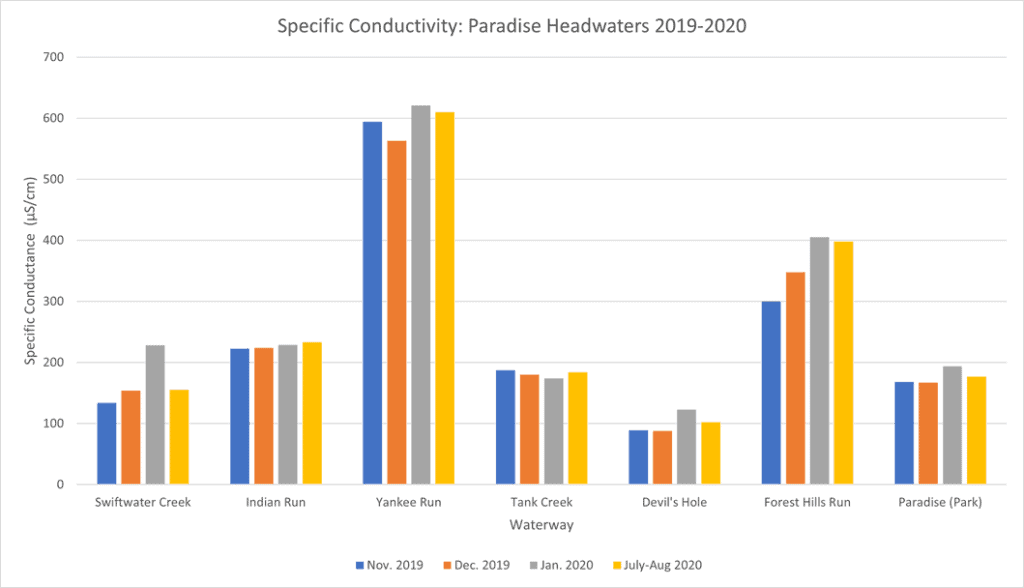