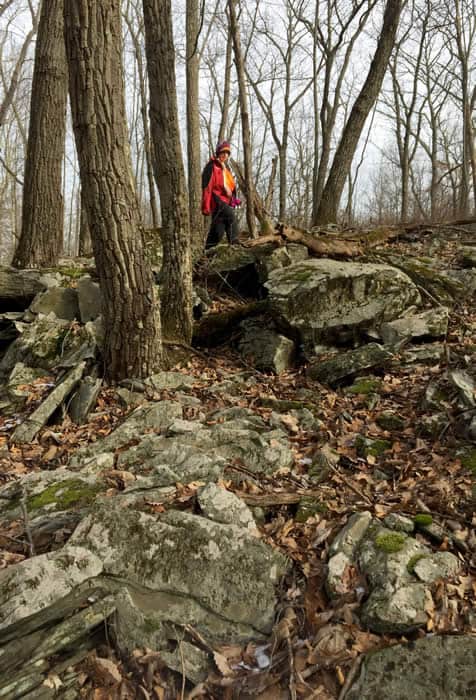 Where: Take Route 191 to Paradise Township. Turn onto Browns Hill Road. At the crest of the hill, turn left onto Alpine Road. Follow Alpine to the parking area cul-de-sac. Be careful not to block nearby driveways.
GPS coordinates for cul-de-sac: 41.117779, -75.249659

Trail information: No established trails or blazes. Overgrown woods roads are level, with some rocky footing.

High on the ridge that separates Brodhead Creek and Cranberry Creek is a neighborhood of tidy homes. From the road, through the leafless trees, long views overlook Paradise Township and the folded valleys of the Cranberry, Paradise and Swiftwater creeks.

It was afternoon, just before the shortest day of the year in December — cold, bright and clear. My goal was the cul-de-sac at the end of this road, the trailhead for Paradise’s newest preserve. Paradise Township only recently acquired the land, and there’s no sign at the trailhead yet, just a length of chain between two trees where a woods road begins.

There are no established trails, either, or blazes. But the township bought this land because its 144 acres border Paradise Price Preserve – land I know fairly well. So I set off on one of the overgrown woods roads, headed in what seemed the right direction. 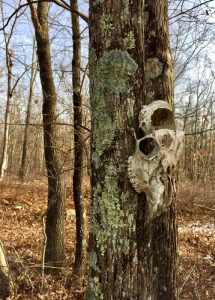 I was welcomed by a screaming blue jay and skittish flock of juncos, flitting along at ground level. A hawk sailed silently overhead, landing on a nearby oak snag, one of the thousands of oaks killed by gypsy moths along this ridge a few years back. Blueberry bushes and oak saplings fill in among the remaining open forest of mixed hardwoods.

Most of the mature trees are the same size – evidence that this land was cleared, likely during the last Pennsylvania clear-cutting. There are very few glacier-dropped boulders, but as I move along the trail, I notice stretches of glacial debris, including one enormous rock cairn 20 feet high and a football field long.

The trail was level, and the footing was rocky with chunks and slabs of bluestone. The closer I get to Paradise Price Preserve and the marshes along its eastern edge, the wetter it becomes. Ruts are filled with water and a thin skim of ice. At one point the trail looks more like a vernal pool.

All this water eventually makes its way to Brodhead Creek. From the high point of the ridge, some flows east, directly toward the Brodhead. Water also sheds westward toward the clear and pure Cranberry Creek, then joins Paradise Creek, which in turn joins the Brodhead downstream, near where the Stites Mountain Tunnel is being repaired. Keeping this open woodland undeveloped protects pure, abundant drinking water for thousands of people in our community, and for millions more downstream.

I’d been lucky in choosing my direction, and suddenly I knew exactly where I was, on the eastern edge of Paradise Price Preserve. The trail to my right leads down to Brodhead Creek and Targa Falls. More exploring took me to the high point of the ridge, at 1,100 feet, a small clearing of red rock, scrub oak, and abundant reindeer moss and other lichens.

This conserved forest gives hundreds of nearby residents easy access to the outdoor life — our heritage, safeguarded for us, our kids and grandkids. We all owe heartfelt thanks to the voters of Paradise, Barrett and other townships, the county and state, Pocono Heritage Land Trust, and volunteers who make it possible.

And more: This is one end of a greenway whose trails connect many public lands. It runs 4 miles as the crow flies along the ridge, across Henry’s Crossing Road, northwest toward Route 390 in Cresco, near state game lands. But that’s a hike for another day!

Carol Hillestad is a hike leader and writer for Get Outdoors Poconos, a grant-funded series administered by Brodhead Watershed Association.

A firepit marks a crossroads near the entrance to Browns Hill Preserve.
The entrance to Browns Hill Preserve will eventually be marked with a sign, and the trails will be blazed.
Near the eastern boundary with Paradise Price Preserve, the trail looks like a vernal pool.
This small clearing at the high point of the preserve ridge was once intended for a cell tower.
The three main types of lichens find a footing in a red-shale clearing. “British soldier,” at center, is one of the fruticose lichens, which can be shrubby or hairy. Foliose lichens (lower left) are leafy; you can usually see both sides of the “leaves.” Crustose lichens, on the rock in the background, are like a crust and often colorful. They can seem to be painted on the surface where they are attached.
Bright green star moss glows in the leaf litter long after other green plants fade. It is common in Pocono woodlands.
This blue-green foliose lichen cloaks the bark of a tree.